A Note from the President’s Desk: Remembering Jack Bogle 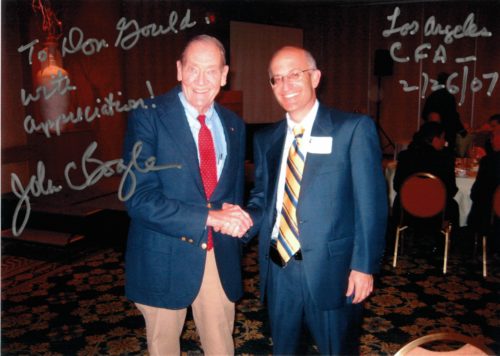 In mid-January we lost an investment giant with the passing of Vanguard funds founder John C. (Jack) Bogle at 89. Arguably, no individual in the last century has had a larger positive impact on the individual investor.

His structuring of Vanguard as a mutual fund management company owned by the mutual funds themselves (as opposed to third-party private owners) has had a profound impact on the evolution of the mutual fund industry. Likewise, his introduction of the first index fund for retail investors revolutionized investing.

By creating Vanguard as a customer-owned entity, like a co-op, Bogle gave Vanguard an inexorable competitive advantage. A typical management company earns a profit by charging more than its cost of delivering its service. Vanguard has no similar motivation. Any such profit margin at Vanguard would simply accrue to the benefit of Vanguard’s customers (investors in the Vanguard mutual funds), who indirectly own the Vanguard management company. So instead, Vanguard runs itself essentially at cost, charging the mutual funds it manages only its own cost of operation. The foregone profits at the management company level are returned to fund investors in the form of lower fund expenses.

The customer-owned structure gave Vanguard an immediate and durable pricing edge over its profit-minded competitors.

The introduction of index mutual funds—mutual funds that seek to replicate the performance of an index (such as the S&P 500) by holding the component stocks or bonds of the index itself—reinforced Vanguard’s price and performance advantage. Index funds could be run at lower cost than conventional actively-managed funds (which require laborious securities selection in seeking outperformance) since the index funds portfolios were constructed simply by mimicking the index itself.

These pricing edges, slowly but surely, translated into a performance edge—other things being equal, lower fund expenses mean higher fund returns. As the public came to understand Vanguard’s inherent performance advantage, its assets under management ballooned. Massive asset growth led to yet greater price advantages as Vanguard’s fixed costs were spread over an ever-larger asset base. This has enabled Vanguard to repeatedly reduce its management fee rates over time, passing the benefits of scale along to its customers.

Vanguard now oversees a staggering $5.3 trillion in customer assets, second only to BlackRock. Vanguard’s presence has pressured other fund companies to lower their fees to remain competitive. Vanguard has also spurred an explosion in the popularity and availability of index funds of all stripes. Gould Asset Management has relied heavily on index funds for implementing client portfolios since our founding 20 years ago. Index funds offer a combination of cost-effectiveness, tax efficiency, and flexibility that can’t be beat. All these factors benefit long-term performance.

In a 2007 Wall Street Journal interview with Bogle, the writer suggested that Bogle had left perhaps billions of dollars of personal net worth on the table by choosing not to own the Vanguard management company himself. After all, the Johnsons of Fidelity and the Johnsons (no relation) of Franklin Templeton had both become multi-billionaires that way.

Reading the article, I felt the analysis was wrong, but pointed to a more important truth. Had Jack Bogle taken the conventional ownership route, his success would have depended largely on marketing an upstart fund company with no particular competitive advantage. Vanguard’s success largely derived from an ownership structure that gave it a huge price (and, therefore, performance) advantage. It’s a fair bet that with a more traditional ownership structure, we might never have heard of Vanguard.

The important point is not what Bogle may have failed to do for himself, but rather what he did do for his customers. As I put it in a letter to the Journal, published on September 7, 2006:

Bogle Enriched Himself and Vanguard’s Clients

In regard to “The Weekend Interview with Jack Bogle: ‘First of All, I’m an Honest Guy’,” by Holman W. Jenkins Jr. (editorial page, Sept. 2):

Thanks for the well-deserved tribute to Jack Bogle. It is debatable whether Mr. Bogle would be worth $20 billion today had he structured Vanguard according to the traditional for-profit fund management model. But what’s beyond debate is that Mr. Bogle has enriched Vanguard’s clients (mostly individual investors) to the tune of that same $20 billion. And he’s enriched by more billions still the clients of Vanguard’s competitors by bringing serious price competition to the mutual fund industry.

By these standards, Mr. Bogle is in philanthropic league with the likes of Bill Gates and Warren Buffett, and surely deserves the title of “hero.”

A couple days later I was both surprised and thrilled to receive a call from Jack Bogle himself, thanking me for my letter. In a subsequent handwritten note, he said the letter had “sent my spirits soaring.” This led to an in-person meeting in Los Angeles a few months later. The photo above records that moment.

Jack Bogle was one of a kind. He will be missed, but what a living legacy he leaves behind. Truly inspirational.