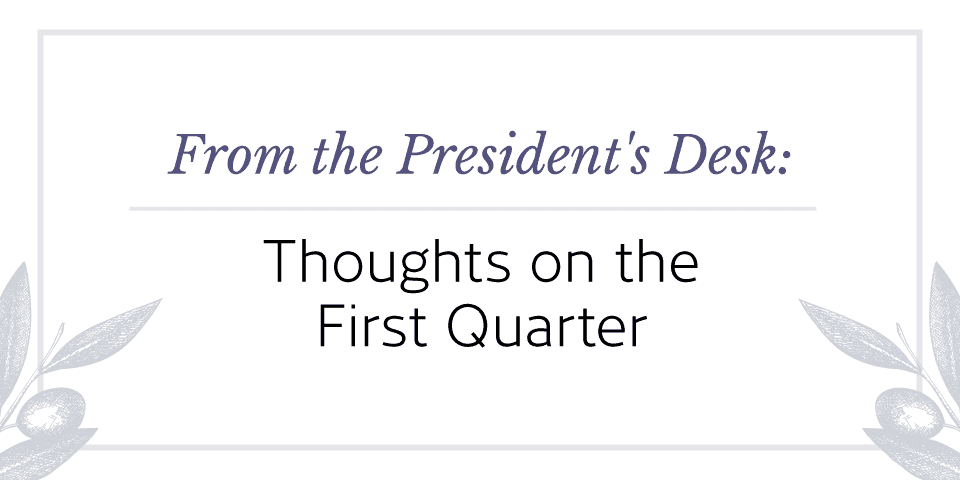 “Winter is coming.” It’s the grave mantra of TV’s Game of Thrones, portending a possible end of days for the mythical kingdom. Hundreds of millions of viewers worldwide anxiously await the outcome. Meanwhile, back at the Claremont ranch, happily, it’s springtime. Though some snow still caps nearby Mt. Baldy to remind us of our thankfully wet winter, the hillsides are now lush with grasses and wildflowers, while trees in the downtown village burst with blossoms. And soon a sense of calm will descend as the weather warms and most of the town’s 5,000 college students depart for their summer adventures.

If only the economy’s seasons of expansion and contraction were so easily demarcated!

A City of Two Tales
The city is New York, home to the world’s largest stock market and bond market, and lately each market has been telling a different tale.

Meanwhile, on the bond side we saw in March a resumption of the sharp decline in yields that commenced last November and December. For a brief period, long-term Treasury yields fell below short-term, creating the inverted yield curve that often presages recession.

If we are to infer economic forecasts from recent stock and bond market behavior, the two markets are giving off contradictory signals that we can’t easily reconcile. The V-shaped rebound of the stock market suggests that corporate earnings will hold up better than had been feared in the fourth quarter. In contrast, the plunge in real interest rates[1] in the first quarter implies a significant drop in the demand for borrowed money, indicative of a slowing economy.

In mid-March, the Federal Reserve abruptly changed course, announcing there would likely be no more rate hikes in 2019. Suddenly, the Fed is worried more about a softening economy than overheating and inflation. But the US stock market took the news in stride and continued its climb. From Christmas Eve through the end of the first quarter, the S&P 500 climbed a remarkable 21.2%!

On the surface, the bond market seems much more concerned about recession than the stock market. But we think that’s a poor explanation. The idea that stock and bond market investors represent two separate groups with vastly different interpretations of the same data strikes us as farfetched. Most investors have balanced portfolios containing both stocks and bonds.

A Two-Step Adjustment
An alternative explanation, and perhaps a way to reconcile the stock and bond markets’ messages, is that the further decline in interest rates in the first quarter is more a function of a slowing global economy than a reflection of any changes in the domestic outlook. A weakening economic picture abroad has pushed down interest rates worldwide[2], including here in the US. In other words, the most recent down move in yields might be more a reflection of global weakness than domestic. The stock market seems to be telling us that the US economy is not falling off a cliff anytime soon and that today’s interest rate levels, while much lower than a year ago, are not inconsistent with continued economic and earnings growth.

Other things being equal, it is reasonable for the stock market to appreciate when real interest rates decline as they did in the first quarter. Lower real interest rates make any given stream of corporate earnings more valuable. Our valuation models suggest that even after their recent surge, stocks remain neither unusually cheap nor expensive by historical standards.

Of course, given the interdependence of national economies today, as well as the multinational nature of America’s largest companies, one can reasonably wonder how long the US economy and stock market can withstand more severe contraction abroad. We’ll find out.

[2] Yields on 10-year German and Japanese government bonds recently fell back into negative territory again. That’s right, the bondholder pays the government for the privilege of holding the saver’s money.

A Note from the President’s Desk: Remembering Jack Bogle