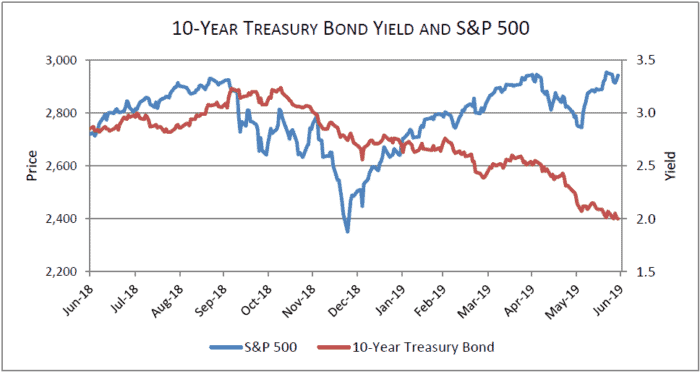 Cognitive Dissonance
Investors may be experiencing a bout of cognitive dissonance. Many indicators show the global economy slowing, and recession warnings abound. A decelerating economy hurts corporate earnings, which are a primary driver of stock prices. Yet the US stock market is making all-time highs. What’s going on? Well, it’s complicated.

Yes, anything that depresses earnings is bad for stocks, but that’s far from the whole story.

The stock market is a discounting machine, always looking ahead. It peers into the future and integrates what it sees into prices, right then and there. From the behavior of interest rates over the past year—particularly the sharp drop in long-term interest rates—we know that investors have been placing rising odds on recession for quite some time. So, it’s entirely possible the market already baked a recession into stock prices when it took a steep decline last fall.

Several factors could explain the market’s strong performance this year. Perhaps investors foresee a relatively short and shallow downturn ahead. The market could be looking out beyond a possible recession to the subsequent recovery and expansion.

Lower interest rates (and the prospect of central bank rate cuts ahead) are certainly a big positive for the stock market, because stocks are not valued in isolation, but rather in relation to the alternatives. The less one can earn on a bond or a bank CD, the more attractive a stream of corporate earnings (i.e., stocks) becomes by comparison. As one indication of this, our proprietary stock market valuation model suggests that despite record-high stock prices and above-average price-to-earnings ratios, the risk of a bear market beginning tomorrow is only about, or even slightly below, its long-term average.

Of course, it’s anyone’s guess where stocks go in the very near term. Surely, any change in the consensus view on recession—its depth and duration—will move stocks accordingly.

In an attempt to stimulate growth coming out of the Great Recession of 2007-2009, central banks around the world held short-term rates at or near zero for many years on end. Additionally, they engaged in “quantitative easing,” which is the open market purchase of bonds for the purpose of tamping down interest rates on longer term borrowing. The combination of this easy monetary policy and generally sluggish growth in much of the developed world led to an extended period of negative yields on government bonds in places like Germany and Japan.

Negative yields? Yes, you actually had to pay the government, banks and others for the privilege of holding your money. We reviewed this phenomenon in 2016, near its peak. You can read it here.

In the wake of our global slowdown, low and even negative interest rates are back in force. Some remarkable statistics:[1]

More than $12.5 trillion worth of bonds worldwide now trade at a yield below zero—more than at the 2016 peak.

More than 90% of all bonds now yield less than their currency’s corresponding inflation rate, i.e., “real” yields are mostly negative.

Of course, lower rates are good news for borrowers. Homeowners can refinance mortgages and cut their monthly payments. Corporations and governments generally will see lower interest costs on their debt.
(For a more detailed look at economic and market conditions, be sure to see our Quarterly Economic and Market Review.)

Implications of Lower Expected Returns
For investors, the challenge is how to adapt financial plans to today’s low real interest rates and probably below-average expected returns on stocks. The main variables under one’s control are how long to work, how much to save while working, how much to spend in retirement, and how to invest the portfolio. Longevity and future market returns are also quite important, but largely beyond our control, so we must focus on what we can influence.

Arguably, this is a greater challenge for investors still in early or mid-career. For retired investors, bigger account balances have accompanied the decline in expected returns, so it is hopefully the case that today’s higher portfolio values will offset the potentially lower future returns on those portfolios.

For those still a long way from retirement, other things being equal, today’s market environment argues in favor of working longer, and/or saving more, allowing for greater accumulation prior to retirement. Of course, each situation is unique, and part of our job is to help you build an investment plan that gives you confidence across a wide range of possible future scenarios. We have many tools for doing just that, so please let us know if this is an area where we can help you.