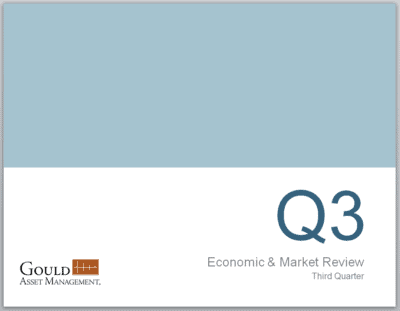 Note: This post is an excerpt from Gould Asset Management’s Economic and Market Review for the Third Quarter of 2019. The excerpt is posted here for the benefit of our blog subscribers.

The unemployment rate dropped to 3.5% in September, the lowest mark since December 1969. Despite the increase in jobs, hourly earnings growth is slowing.

Manufacturing activity in the US plummeted to a 10-year low in September. Trade tensions with China continue to weigh on business confidence and the manufacturing sector.

Low mortgage rates helped the housing sector, which has been a mixed bag for the economy lately. New and existing home sales showed strength in the latest reports.

The Fed’s Tug of War

The Fed cut its benchmark rate twice over the quarter to 1.75%-2.00% as it seeks to cushion the economy against a global slowdown. Fed Chairman Jerome Powell cited trade fears              and a weakening manufacturing backdrop as the main economic headwinds, but noted that consumers (who account for roughly two-thirds of the economy) remain solid.

The September rate cut, however, was met with growing dissent among Fed participants, with two preferring to hold rates steady and one voting for a larger cut. The Fed is also          under continued pressure from President Trump to more aggressively reduce rates.

Updated FOMC forecasts show even more uncertainty with policy rates. Seven members expect one more quarter percentage cut by the end of the year, with five preferring no                  additional cuts, and five wanting rate hikes back above 2.0%. Future markets appear more certain, currently forecasting about an 75% chance of another rate cut in October.

To continue reading, please see our entire Economic and Market Review (link will open in a new window).

MONEY and INVE$TING: $75 Billion on the Sidewalk 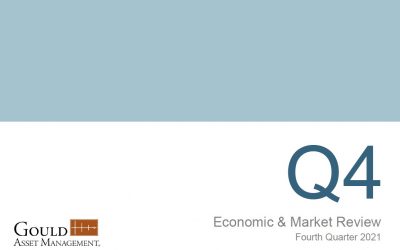