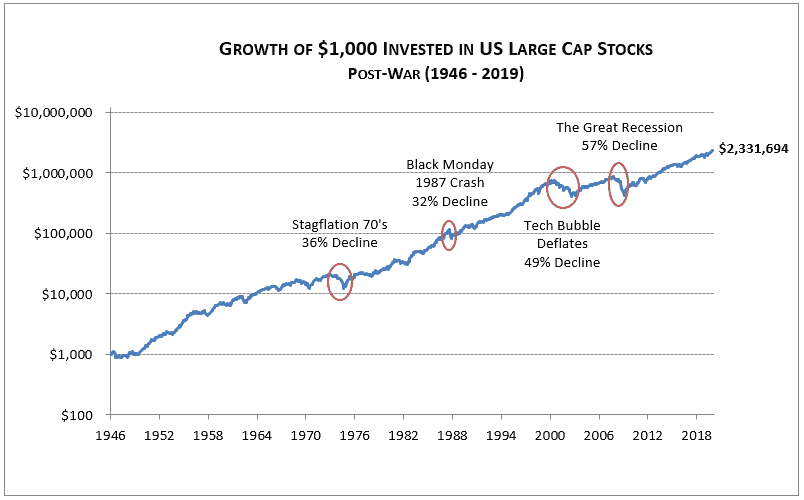 Global stock prices continued to gyrate wildly, and mostly downward, this week as markets adjust to a steady stream of new developments in the unfolding crisis surrounding COVID-19. Today’s more than 9% US stock market decline was its biggest one-day drop since October 1987.

All four shocks have a common source, which is the expectation of a shrinking economy in the near term. Recession risks were already somewhat elevated before the pandemic emerged. Now an economic downturn is largely unavoidable.

Stock prices have quickly adjusted to reflect the worsening outlook. In less than a month, the benchmark S&P 500 US large cap stock index has fallen 27%, putting it squarely in bear market territory and close to the average bear market’s 30% peak-to-trough decline. (Note: “bear market” simply means a market has dropped more than 20% from its recent peak. It does not imply anything about the future course of the market. Technically, a bear market lasts until the market climbs at least 20% from a recent low, at which point we are back in a bull market.)

So, to paraphrase Rudyard Kipling, how do we keep our heads amidst this tumult? Here’s our thoughts.

In any market decline, there is a tendency to anchor to one’s “high water” mark, that is, the point at which your portfolio reached its historical maximum market value. For many, that point was about 4 weeks ago. It is worth remembering that almost no one intended or needed to liquidate their portfolio at that moment, nor is that the case now. In fact, a typical balanced portfolio of stocks and bonds is now about where it was in early 2019, a point at which most investors were pleased with where they were financially.

It’s more reassuring to view your portfolio over the broader time horizon for which it is intended. That applies both to its historical returns, as well as the future. Those who are in an accumulation phase will be adding to their portfolios at lower prices. Those taking distributions are taking them over a long period of time, not all at once and certainly not right now.

Below is a chart that shows the US stock market over the past 70+ years. We have circled several of the steepest declines, some more than 50%. Viewed from a distance, the declines can be seen to be part of the natural fluctuations of markets over time. They can also be seen within the context of the longer-term upward trend that is the product of economic growth.

We’ll be the first to tell you that we don’t know where the current decline will bottom out. It might be near current levels or it could be substantially lower. It’s almost certain that markets will remain volatile for some time to come. That said, we are firmly convinced that economic growth will resume in time. The stock market will likely see it coming before others and could easily turn upward well in advance of the economic statistics.

The COVID-19 pandemic and its associated economic and financial fallout are very serious. There’s no way to sugarcoat what we’re all experiencing. But like crises of the past—wars, depressions, terrorism, and even pandemics—it will pass in time and portfolios will recover.

We’re Here for You

However long it takes to turn the page on this disquieting chapter, we will be there with you throughout. Please don’t hesitate to pick up the phone or email if anxiety is getting the better of you. That’s why we’re here.

Some Perspective on the Current Stock Market Decline

MONEY and INVE$TING: Investing During Pandemic

MONEY and INVE$TING: The One Economic Number to Watch (Part 2)

MONEY and INVE$TING: The One Economic Number to Watch (Part 1)