MONEY and INVE$TING: Bitcoin and the Brave New World of Cryptocurrency

By now nearly everyone has heard of Bitcoin, the best known example of a category of asset known as cryptocurrency. Digital cryptography techniques protect these assets from theft, hence the “crypto” name.

Bitcoin can be purchased with dollars through firms such as Coinbase and CoinDesk, and even from three kiosks in Claremont. You could also obtain Bitcoin by accepting it as payment for goods or services.

The breakthrough behind cryptocurrency is something called blockchain technology. Blockchain serves as a fraud-resistant system for tracking Bitcoin ownership through a global network of independent computers. Bitcoin are created through a process known as “mining” that requires massive computational resources. For more details, we recommend Wikipedia’s entry on cryptocurrency.

Since 2013 the dollar price of one Bitcoin has been highly volatile, ranging from about $100 to $20,000. Currently it trades at about $11,000. The question everyone asks is, what gives a cryptocurrency like Bitcoin any value? Some of the smartest investors in the world (for example, Warren Buffett’s partner, Charlie Munger) claim it has no value at all, akin to “worthless, artificial gold.” 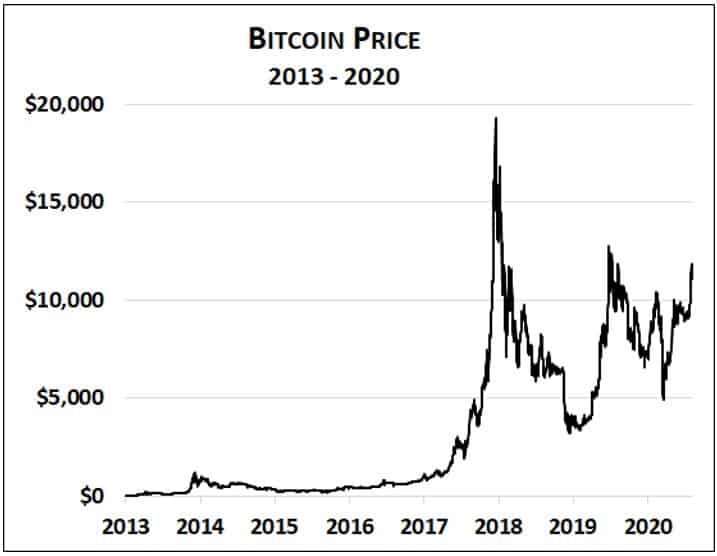 Over time, I have come to a different conclusion. I believe Bitcoin and other cryptocurrencies have value. What is unclear is how much value.

We know that asset prices can diverge dramatically from any reasonable estimate of true value. Consider the famous Dutch “tulip mania” of the 1630s, when a single tulip bulb reportedly traded at a price equal to ten years of the average laborer’s wages. Possibly Bitcoin’s current price also represents a bubble, bearing little relation to the benefits it confers on its holders.

Why Bitcoin Has Some Value

What changed my mind about Bitcoin? In addition to having the expected attributes of currency (acceptance, divisibility, transferability, durability, counterfeit-resistance), Bitcoin delivers certain benefits unique to cryptocurrency, such as scarcity, protection from seizure, and privacy.

Scarcity – Unlike dollars and other conventional currencies, the quantity of Bitcoin is limited. Currently there are 18.5 million Bitcoin in existence. The quantity can never exceed 21 million. In this respect, Bitcoin resembles gold in that there is a relatively fixed supply; in other words, it is scarce. Contrast this with the trillions of dollars recently created by the Federal Reserve in response to the Covid-related economic crisis.

Protection from Seizure – Bitcoin protects its holders from government seizure because no government controls its issuance or the “banking” system through which it transacts. The average American might not worry much about this, but in many countries today and throughout history, confiscation is a real risk.

Privacy – Bitcoin can be transacted in a manner that protects the user’s identity, increasingly a priority in an era when both our electronic and physical activities are tracked by third parties. Proponents cite civil liberties benefits, while some governments fear this facilitates illegal activities.

Therefore, it seems that Bitcoin’s value depends on the combination of the value it provides to holders and whether its dominance (like Skippy and Jif) can limit competition.

I am not investing in Bitcoin for myself or our clients because, among other things, I don’t know how to determine its intrinsic value. Bitcoin is an investment, highly speculative at present given its price volatility. Whether it’s a good or bad investment will only be known in hindsight. Investors who want to own Bitcoin could allocate a small portion of their portfolio and buy fixed small amounts at regular intervals to reduce timing risk. Buyer beware!

Possibly a better way to make money on the cryptocurrency concept is to invest in companies that develop new applications for blockchain technology, something already well under way.

The next generation of cryptocurrency (for example, Ethereum) is “programmable,” meaning that payments are completed only if certain conditions are met. This has profound implications for how business might get done in the future. For example, an Ethereum payment could be structured such that Bob sends Ethereum to Ted, but only if Carol approves. Note that this escrow-like transaction could be accomplished without lawyers, an escrow company, or banks.

As this is written, a few industrious Claremont Colleges students might be programming currency from their parents’ basement. Stay tuned!